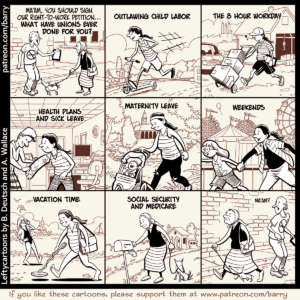 “So-called Right to Work laws give corporations the ability to trample workers’ rights and dismantle unions. I refuse to let that happen,” said Senator Sherrod Brown. “Right to Work is really ‘Right to Work for less.’”

U.S. workers have an unlikely ally in their fight against Right to Work…and it’s one with significant negotiating power in the international community.

According to The Globe and Mail, Canadian negotiators are calling for the removal of Right to Work laws in the U.S.

Members of Canada’s negotiation team are requesting the U.S. pass a federal law which bans state governments from passing Right to Work legislation. The move to revive unions in major industries comes from an effort to make the U.S. and Mexico adopt better labor standards.

“It appears that Missouri labor groups will be able to block the state’s new right-to-work law from taking effect Aug. 28. They’ve collected more than 300,000 notarized signatures in the fight to force a statewide vote over the law in November 2018.” 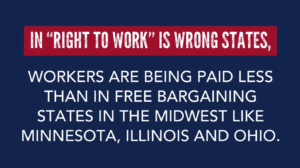 A recent study has confirmed what we already know – workers in #RightToWorkIsWRONG states are struggling compared to workers in free bargaining states, like Ohio. Don’t trust it!