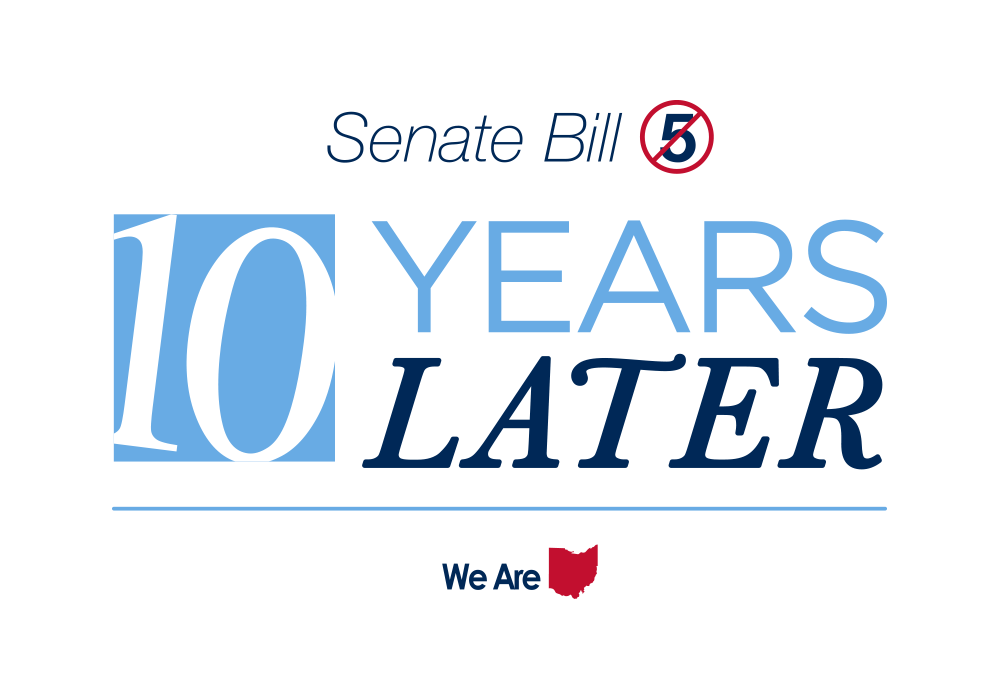 A decade ago, working Ohioans stood together and fought back against one of the most anti-worker, anti-Ohioan bills that has ever made it to the Governor’s desk. The law was Senate Bill 5 and it stripped all public employees of their collective bargaining rights.

Workers began fighting back as soon the bad idea was announced and we didn’t stop until Gov. John Kasich was rubbing his forehead in forlorn disbelief on Election Night, 2011.

We could not have done this without so many of you pitching in your time, your sweat, your passion for workers’ rights so please we want to hear your SB 5 story.

RALLIES AND FIGHTING BACK

The fight was on.

For the next two months, in the dead of winter, workers from all across the state rallied peacefully at the Statehouse, filling up the committee hearing rooms, taking up positions in the Statehouse Atrium and Rotunda.

We held rallies on the weekend on the Statehouse lawn where thousands of supporters listened to workers talk about why SB 5 was unfair, unsafe and would hurt us all.

Do you remember the freezing day Gov. John Kasich locked us out of the Statehouse because he claimed there was no capacity for more people?

We went on social media and showed photos of empty hallways and stairwells, and embarrassed Gov. Kasich to back down and open up the Statehouse to the people.

At the same time we were showing up in massive numbers at the Statehouse, workers across the state were holding town halls and rallies that attracted thousands of people in small, medium and large cities.

In the end, the Ohio Senate narrowly passed SB 5 by a 17-16 margin after a number of senators who told us they would vote no were strong-armed into flipping their vote to yes. At the end of March, the Ohio House voted 53-44 the bill, but not before workers peacefully filled the public viewing seats while lawmakers debated.

House Speaker Bill Batchelder ordered the State Highway Patrol to remove the workers from the House and then sarcastically said, “now that the intellectuals have left the building,” the House could vote.

When Gov. Kasich inked his deal with the devil, We Are Ohio was born. It was a citizen-driven, grass roots, community-based coalition of everyday people across our state.

We were fortunate in Ohio. Unlike other states where similar attacks on workers occurred, we have the right to go directly to voters and ask them if they think a law is good or bad for Ohio.

We had 90 days to collect 231,149 valid signatures to put the question before voters in November. The “People’s Petition,” had started.

Through April, May and June, thousands of everyday heroes picked up clipboards, printed out petitions and collected signatures in all 88 Ohio counties. The volunteer effort was historic and heroic. People were not only asking “where do I sign,” but “how do I circulate and collect signatures?”

Supporters used their imaginations to collect signatures: Hot dog vendors in Cleveland, drive-thru petition rallies in places like Wooster, Ohio University students at the Saturday morning Farmers Market in Athens. Everywhere you looked, someone was collecting, someone was signing.

On June 29, we held the “People’s Parade” in Columbus. Nearly 6,200 workers gathered and walked for more than a mile through the city with a banner bearing the words “The Million Signature March.” Behind us, a semi-truck was laden with 1,502 boxes filled with 1,298,301 signatures. We announced the actual number and the crowd cheering echoed through the streets of the capital. A structural engineer was brought in to ensure the boxes of signatures would not collapse the 14th floor of the Secretary of State’s office.

THE CAMPAIGN TO VICTORY IN NOVEMBER

We didn’t let up for a moment. Now the campaign to go directly to the ballot began.

More than 17,000 volunteers made phone calls, and went door-to-door as we launched a massive grass roots effort to register and get out the vote.

We cannot thank you enough for making history and sending a strong message to the anti-worker forces in the state and across America. Don’t mess with Ohio.